gifts that keep on giving 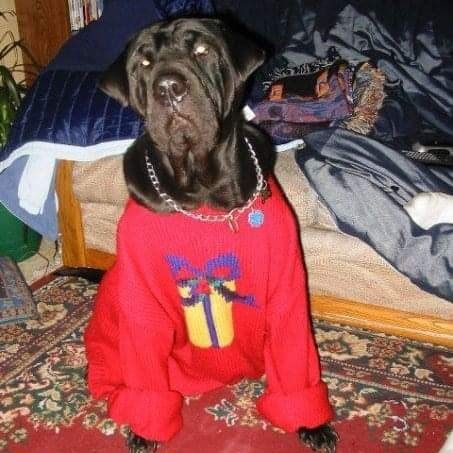 Years ago (probably almost a decade ago), my mother-in-law gave my wife a sweater of the ugly variety. My wife decided it was better suited for our dog at the time, Rosco. So, then we got a laugh about it and went on with our lives.

A couple of weeks ago, the image of the dog in the sweater became my wife’s profile picture on Facebook. It had the hints of being festive while it was also a reminder of the dog. We then reminisced about the incident, but my mother-in-law had forgotten she was the origin of the ugly sweater until I reminded her. The conversation on the comical topic was made funnier by this revelation. So, years later, the gift was still giving.

Books are like that. When I find a good book, I tend to reread it over and over. I’ve lost count the number of times I’ve read books like Jurassic Park by Michael Chrichton, A World out of Time by Larry Niven, Sphere by Michael Chrichton, and Cold as Ice by Charles Sheffield. My new repeater is The Martian by Andy Weir. Every time I read these books, I discover something new about them. Maybe it is an interplay I hadn’t noticed before or some foreshadowing so well done that you don’t notice it until you knew what was being foreshadowed.

In my own writing, I’ve got passages like this. On first read, the reader wonders what the heck the point of some passages were. As they move along, they forget all about it. Then something else comes up to tie in with the earlier bit and then things make since. The only problem is the reader has forgotten it. Thus, a second read would open their eyes to it. (Note: I’ve made the story enjoyable even if you forget about it.)

Lately, I’ve been working on a paranormal western series that has hidden information in the first book that isn’t revealed until the third book! To keep the information fresh, I’ve actually put more foreshadowing in the second book. I’m almost beating the reader over the head with it, but the reader doesn’t notice (at least my advance readers haven’t noticed it). In the first book, the information is taken as a quirk of the character. In the second, the source is a madman, so it almost feels like his ramblings or adds to his derangement. When the reveal happens in the third book, nobody is going to realize I’ve been hitting them over the head with it since book one. Then they’ll reread the series (because it is such a great series) and realize all the callbacks I’ve made to this huge revelation. (Start looking for it in Flaming Curse!)

Books and ugly sweaters are truly gifts that keep on giving! Merry Christmas, everybody.