Home > Blog > out of this world

out of this world 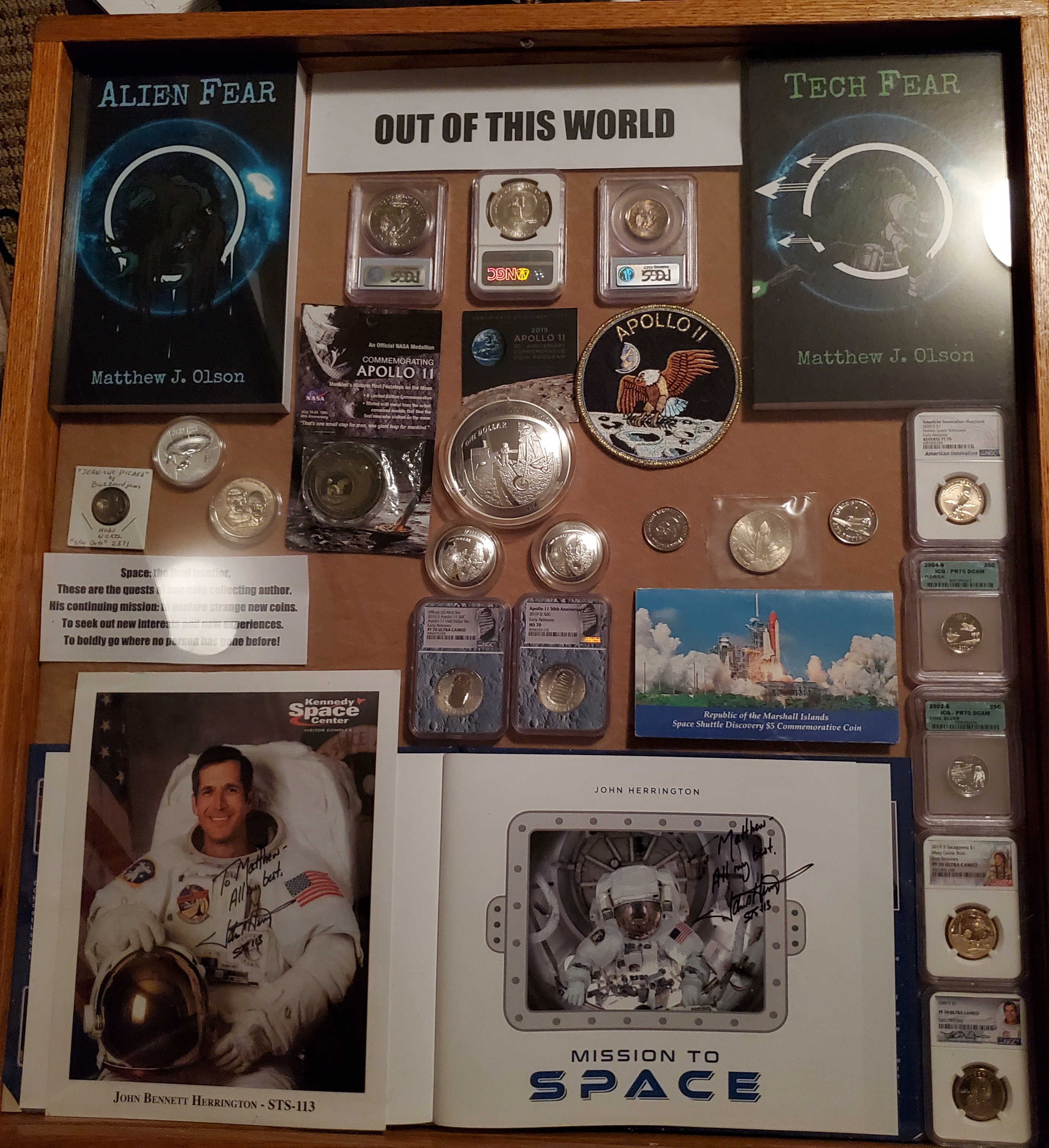 Sorry, but I am going to deviate from my usual blog format of linking animal behavior to my writing. Instead, I’m going to talk about multiple interests aligning. In this case, writing, numismatics, and outer space have all neatly come together for me. I’ve made a display of my various artifacts and will present them at the Manhattan Coin Show this Sunday.

First is my writing. With some of my sci-fi, I went off world with it. Notably, Alien Fear and its sequel, Tech Fear, are set on the planet Centaur in the Alpha Centari system. Humanity’s move to this planet was even a plot device. The amount of scientific research I did for these novels enhanced the reader’s experience and I am proud of what I’ve accomplished. Now my Martian Western, Desperados of Mars, is getting the same treatment. Plus, all my short stories set off world were fun little journeys into the unknown.

A few years ago, I made a trip to Florida for work. I had some down time, so I headed for Kennedy Space Center and was amazed by much of what I saw. I also got to meet astronaut John Herrington and enjoyed a short chat with him. He was from Colorado and saw my Broncos hat and so we started there, but also talked about being an author (he wrote a children’s book and is thinking about doing a memoir). In 2019, as the first Native American tribesmen (there were other astronauts who were part Native American, but not part of a tribe) to fly in space, he was honored by being put on the reverse of the 2019 Sacagawea Dollar. I also acquired a Sacagawea Dollar that was encapsulated with his signature. Other coins pay tribute to other space related items including the 2019 50th anniversary Apollo 11 commemoratives (of which I have all but the gold piece).

So, we’ve talked about my foray into sci-fi, but not about what got me started. In the ‘80s, I watched most everything Trek. There have been quite a few coins dedicated to the show and the actors and ships on it. I don’t have many pieces, but I do have some.

Speaking of research, one of the things I loved to do is research coins and paper money. There is a story behind the pieces, and it’s interesting to listen to it. I’ve now told a story about some of my experiences that are truly out of this world!