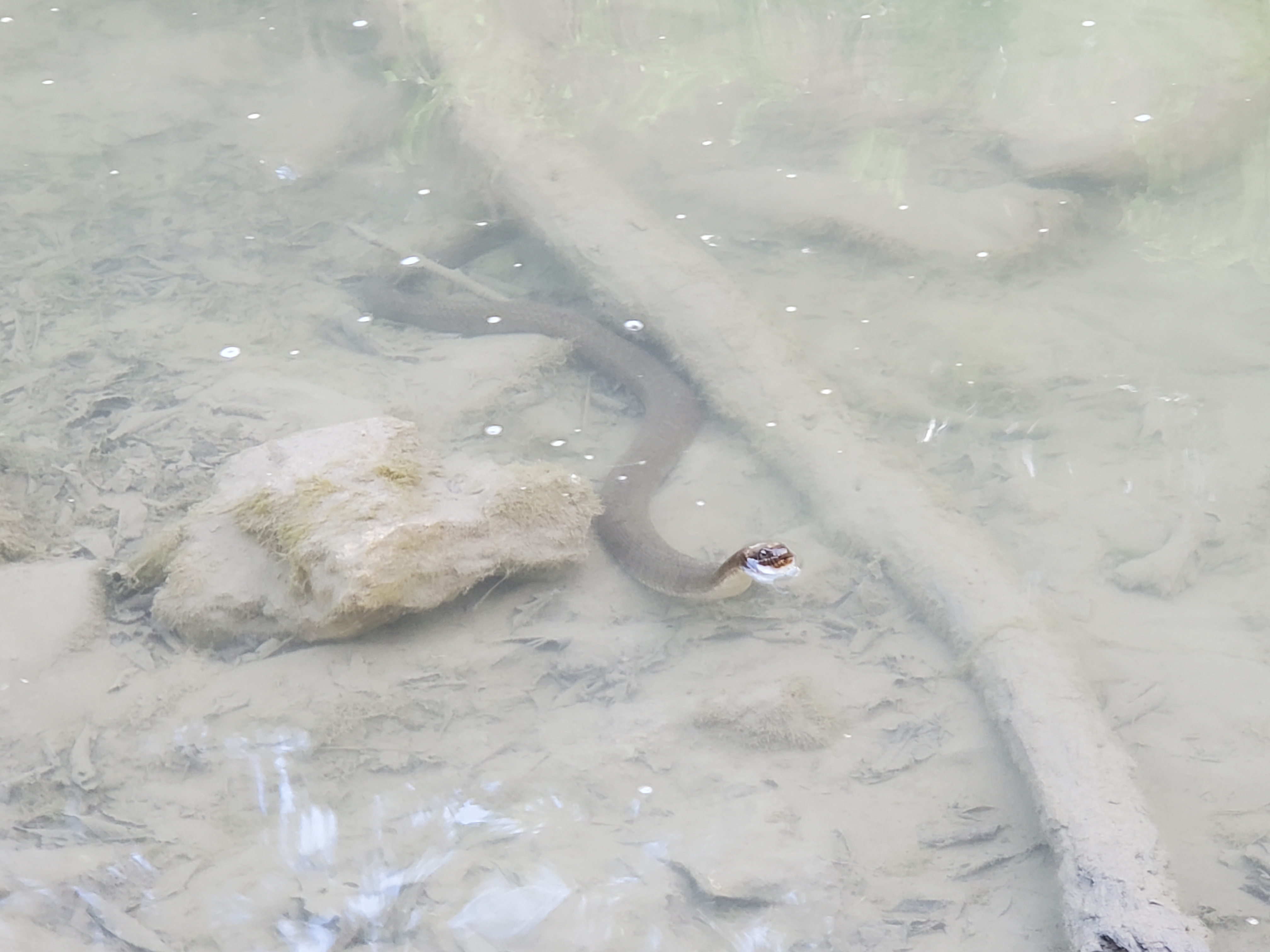 In all the years I’ve gone fishing, I’ve only ever seen one water snake. They’ve probably been there; I just haven’t seen them in the murky water. Then a couple of weeks ago, I saw two water snakes in the same day!

The first snake was in the shallows of a clear lake. It didn’t seem to mind me one bit. Well, until I grabbed my camera and then it was off in no time flat. Even with the boat heading right for it, it didn’t move. I was pulling the boat to shore so that we could have a look at some falls just over the hill from the lake (the runoff from the lake goes through a channel cut through the hill and then to these falls). While the snake wasn’t reacting to the boat movement, it was staying pretty darn still. It alternated between having its head just above water to laying on the floor of the lake. The water was about a foot deep. I believe this was a northern water snake, but I’m not 100% sure.

So, we head over and look at the falls. First, we stood at the top. Even from the forty- or fifty-foot-high ledge, I could see a snake in one of the pools below. I wasn’t too hopeful to see it when we made our way down there (other people were there taking pictures) but was surprised to find it again. This one wasn’t as pretty as the first one, but it didn’t mind being photographed. I first thought it was a cottonmouth, but now I’m pretty sure it isn’t. Looking through online pictures, it does look like a crawfish snake, which makes sense since there is a ton of crawfish in that little creek.

I love nature. It doesn’t always love me when I go to write. I think part of my problem is that I can visualize it, but I can’t write all that I see. Its too many details. My hope is to paint enough of a picture that readers fill in the gaps. While they may not see the same thing I see, or frankly any other reader, they do get the jist of what I need to convey.

Rarely does a full picture of a place make or break a scene. The exception would be a murder mystery. I hate when some authors write about a murder scene and skimp on the details. Then the one detail that was important and never previously mentioned, rears its head on page 250 of a 300-page novel. Sorry, but that needs to be on page 10. I’m glad I’m not a mystery writer. Though, if there is some detail like that missing from one of my stories, I’m not afraid to scroll back on my Word document (or these days, its Scrivener) and write the detail in. Until its published, the novel is fluid!

So, this fishing trip ended up being a bust except for all the pictures of the waterfall and the snake encounters. Was it really a bust, then? It’s a good thing I got something to write about out of it, too!