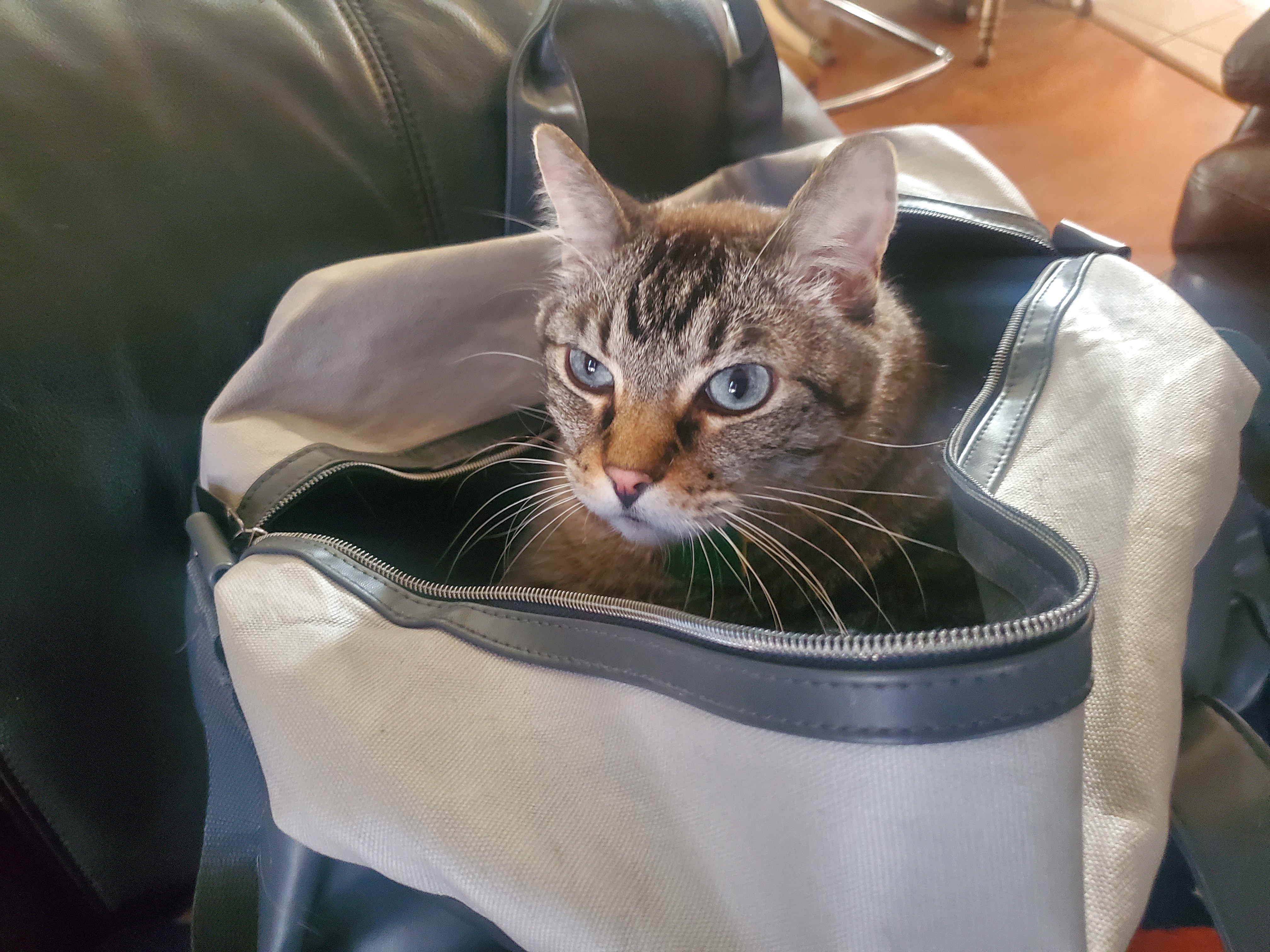 Jynx loves to get into small things like boxes, suitcases, and sacks. Not sure it is a comfort thing so he can feel enveloped (like some people need a heavy blanket in order to sleep, which I am one). This is the same cat that sleeps in a suitcase every night (we padded it with a blanket to make it a little more comfortable). It is kind of funny but also sad when we buy him a toy and he is more interested in the box the toy came in rather than the actual toy. He’s a nut, for sure.

About a month ago, my wife had left her laptop bag on the love seat after returning from a trip. It is a rather large bag as her laptop is a biggie anyway, but kind of narrow. Why she didn’t hang the bag up after emptying it, I don’t know. But Jynx loved that bag. He got in it and barely peeked his head out as he chilled in it. He became a little annoyed getting his picture taken, but otherwise loved his new bag. It was now his as he was taking ownership of it, but eventually, my wife put it away, so it was no longer his.

I’ve been thinking about a story for a while now. It is going to have a Western feel, but it is set on Mars in the future. The basic premise is that these miners are on Mars digging up diamonds and rubies. Luke finds an especially large one and the guy he is digging with is willing to kill for it. Luke kills the guy in self-defense but loses the diamond. Now he must find the diamond, navigate this world of ever-increasing debt, and survive his partner’s sister who is out for revenge. I call it Desperados of Mars. (Some of you may recognize part of my description from the tale “Live and Let Die” from Twisted. This is a continuation of that story.)

I struggled with what to name this. There were going to be several deaths, so I thought about calling it Martian Murders, but that kind of sound like an alien killing people. It also didn’t convey the Western feel I wanted. Then I thought about calling it Mars Pirates. This stemmed directly from Andy Weir’s The Martian where Mark Watney jokes that he is a pirate due to space being international waters and he was going to go steal a ship. I wanted to take that idea further, but it wasn’t working for me. Pirates were just not western.

After finally hitting my home run with Desperados of Mars, I then created a cover for the book. Still no outline, but I wanted a cover. There was also a brief time where I wanted to add “the” to the title, but The Desperados of Mars just didn’t sound quite right. I’ve still got covers for Mars Pirates and The Desperados of Mars, but they will be ignored. Oh, and at one point, I spelled desperados with an e, so it was deperadoes, which is still a correct spelling, but didn’t quite look right (or so my wife says).

So, I had an idea and a cover and the next thing to do was write an outline. I couldn’t help it as I had a song title from a James Bond movie and now an Eagles tune as part of the name for the book, each chapter had to be named after a James Bond theme or Eagles tune. I think that hindered my outlining a bit, but I had fun doing it. Also, the Eagles have a lot of Western sounding songs, so that fit my motif. While the chapters don’t really encompass the songs other than the title, it helped me stay in a set mood for this. Plus, the James Bond theme titles had a lot of death names, so that was a bonus. I’m currently at forty-nine chapters, though I’m not sure if some chapters need combined or if I need to add others. I’ll have to see as I tinker more with the outline and start writing.

So, this book is in the bag like Jynx is. Jynx had to get out of his bag and this book will eventually get released to the world. Currently, I’m thinking 2022, but you never know.