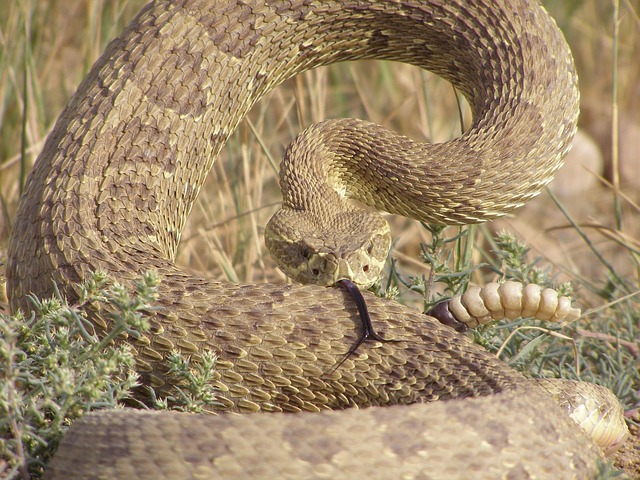 Sometimes hunting is full of surprises. Sometimes, you go to a place knowing it is full of game unable to get one up. Other times, you happen across something that just pours out more game than what you were expecting. I could give story after story like this, but today I want to focus on another aspect: the dreaded rattlesnake.

We’re walking through this pastureland as there is a draw running through it before the draw turns and runs through a field (half of it is cut corn and the other half is recently drilled wheat). I’m walking well left of the draw with the only person further left being my brother, who is walking up a little ahead to shoot any pheasants that may peal out of the draw (if they peal ahead, we’ll get them back up and if they peal right, there are other hunters to shoot them). As we are going along, the terrain is working downhill at this point as the draw widens for a bit and then turns. I see a wash going toward the draw and this has made a bountiful amount of grass for pheasants to hide in. Since the birds have been sitting tight all weekend, I decide to walk through this washout to see if I can’t flush anything. Yep, I flushed something.

I’m walking along with the ground higher than my knees a few yards to either side of me. I’m about halfway down the wash to where the thick weeds are for the draw. I won’t make it clear to the draw as I would walk in front of the next hunter in from me, but I have ten yards or so before that happens. Anyway, I’m busting through this grass at a good pace to really scare any pheasants in my path, but I stop when I see movement out of the corner of my eye. It’s brown, so I’m excited and turn to the left ever so slightly in case it flushes. I look down and see the “V” head rising from the ground next to my leg. The movement I saw was the snake coiling. Then the rattle started.

“Shiiittt!” I yelled as I jumped. (My brother said it was the highest he’d ever seen me jump.) I didn’t jump straight up, but more to jump clear. I then high stepped a few more paces down the washout before I realized that I had a better tool to combat my foe. Plus, there were hunting dogs there that could come across this thing sooner or later. I pointed my shotgun in the middle of the coil and shot. The snake was severed in two and both ends flailed about. The rattle was still sounding, which made me think there was more than one, though I think there was just one. My gun had three more bullets in it, so I proceeded to use them. After the final shot, the rattlesnake quit giving its rattle warning (so its death throes must have concluded at that point). People keep asking me if I kept the rattles. I had no thought to return to the snake. For one thing, even a dead snake can inject venom. Also, I had no use for rattles if I did keep them. Also, I’ve been asked just how much danger I was in. I had some good, high boots to thwart fangs if they went there. I also had on jeans with hunting chaps over them, making it unlikely it could sink its teeth into my calf. Still, though, there was a chance it could have gotten me.

This is one time where life imitated fiction. And it was my own fiction to boot. In Flaming Curse, Bourne comes to a wash in the prairie while on his horse and the horse jumps it with ease, only to land in a nest of rattlesnakes. The horse bucks after it is bitten and bucks off Bourne in the process. He lands on one and gets bitten in the keester. He then rolls away through the wash before another one can bite. Both horse and Bourne are saved by the witch, Marta.

Since I didn’t have a Marta to save me, I’m glad I didn’t get into the same mess as Bourne. The parallel with the wash and the prairie grass is unnerving (can I predict the future?). Bourne wasn’t able to shoot his snakes, but I shot mine.